Smorgasburg in Brooklyn, NY reminds me very much of those county fairs (though unfortunately the carnies have been replaced with vegan non-GMO organic gluten-free hippies). I’m not sure how well known Smorgasburg (which I assume is a combination of Smorgasbord and Williamsburg, the original location) is outside of the New York City area, so for those unfamiliar, it’s a (large) gathering of food vendors that set up shop every Saturday and Sunday from Spring to Fall in one of 2 riverside locations in Brooklyn. I was recently able to make it out to the Brooklyn Bridge Park location (Saturdays are held at East River State Park) for one of the first few weekends of this season.

According to their website there are between 75-100 vendors, though it didn’t seem like quite that many while I was there (though there was certainly no shortage of options). Admission is free (if it’s free, it’s for me), but there are definitely a few things to look out for when you go. While some of the vendors accept credit cards, there are many that are cash only. Conveniently there is an ATM located right within the area, but here you’ll encounter the next thing to look out for: lines. I mentioned there were 75-100 booths – well, there are probably 100-125 lines. Lines for the ATM, lines for the bathroom, and lines for each booth (consider yourself lucky if you are waiting at a booth with only one line – some have you wait to order/pay and then make you wait in another line to actually get your food!). Finally, while admission is free, don’t expect it to be cheap. In my experience, expect to pay about $8-$10 per item. This may not sound like much, but in the handful of times I’ve gone I’ve gotten 4-5 different items which puts this up there with a decent dinner out. To be fair, I have quite an appetite and want to try as much as I can so the average person may be able to get away with 2-3 items, but it’s something to keep in mind.

All of that aside, it’s a fantastic experience that I would whole-heartedly recommend to anyone. The Brooklyn Bridge park location is set right on the water with the iconic Brooklyn Bridge as a backdrop and fantastic views of downtown Manhattan and the East River. It’s hard to think of anywhere else that has such a large and diverse group of food vendors in such a concentrated space. My guess is that just about anyone will be able to find at least 1 thing that they have never had, let alone heard of before. Anyone that appreciates trying new things will love it.

I’ve only tried a small handful of the hundreds of different things offered. On my most recent trip I was able to stop at MofonGo, Mr. Cutters, Schnitz and Maroon Sausage Co before I decided any more would be a tad excessive.

MofonGo is one of those booths that focuses on doing a few things well. I had never tried or heard of mofonogo before (neither the vendor nor the dish its named after) so I wasn’t sure what to expect. Fortunately I only had 2 choices: a vegetable version or a chicken version (so really I only had 1 choice because I’m certainly never going to pick vegetable – come on now!). The best way to describe it is a breadbowl of soup, but instead of bread its mashed plantains and instead of soup it’s a thick sofrito based sort of stew.  I love plantains (quick tip: throw a plantain in the microwave for maybe 30-45 seconds – instant snack) so it was hard to go wrong with this dish. 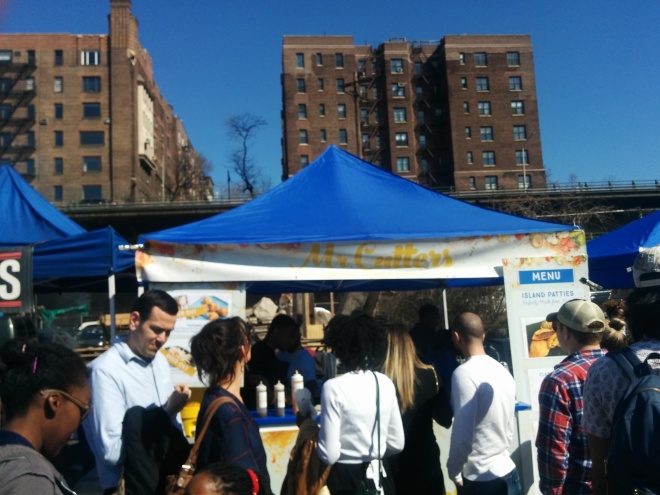 Probably my favorite stop of the day, Mr. Cutters offers several Caribbean themed dishes.  From yuca fries to beef patties to fish cakes.  I opted for the plainly labeled beef patty. It reminded me very much of an empanada.  It’s a part pastry, part tortilla shell filled with Caribbean spice seasoned ground beef.  I’m not sure how better to describe it, but it was delicious! 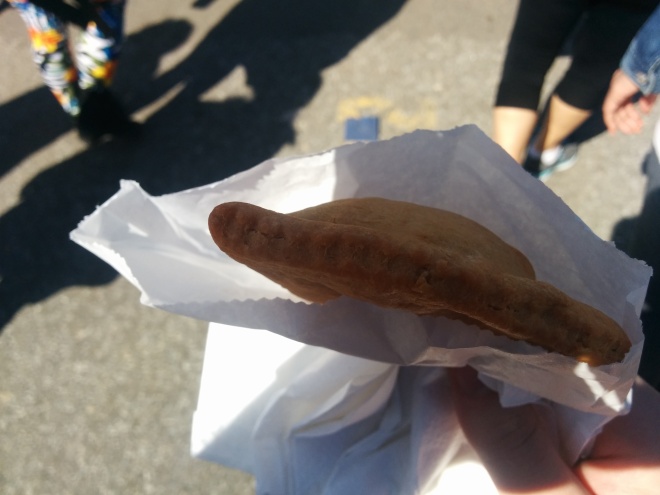 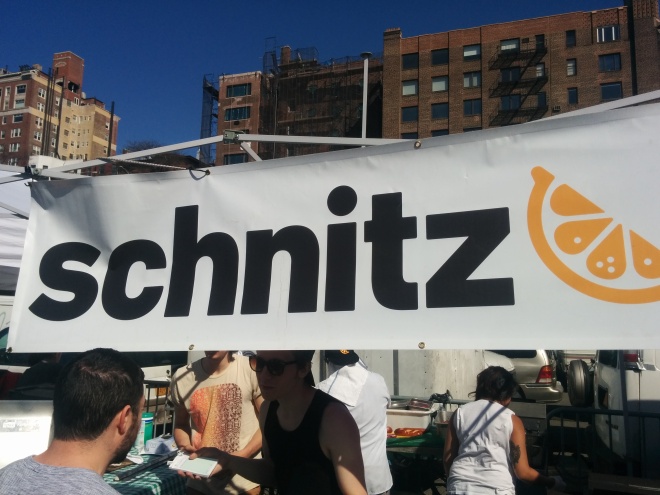 If it wasn’t for one mistake (which was 100% my fault) I think Schnitz would have been my favorite spot of the day. They offered a handful of Schnitzel sandwiches, most of them chicken. I opted for the Bamberg(Chicken, pickled cucumbers, daikon, ginger and shallots with caramelized onion dijon mustard), which seemed to be the “classic”. They even offered half sizes as well which was much appreciated. Something about how the chicken was prepared and fried made it much better than normal fried chicken patties.  I’m usually not the biggest fan of fried foods, but this one definitely surprised me.

Now, something else to know about my tastes; I don’t like condiments. Ketchup, mustard, salad dressing, mayonnaise, relish, secret sauce etc. I just hate them – to the point where anything that touches them becomes inedible to me. When I ordered my Bamberg I knew full well there would be mustard on there. Maybe I was feeling adventurous, maybe it had been so long since I had mustard I thought that maybe now I would like it. I was wrong, very wrong.  I still do not like mustard.  Despite all the mustard I finished it and still quite enjoyed it which speaks to how good the rest of the sandwich was.  Lesson learned.

Maroon Sausage was my last stop of the day. As I was walking into the Smorgasburg area I had noticed several people walking around with a delicious looking bratwurst sandwich and knew that that was how I was going to end my day. It turned out that the dish I saw wasn’t actually bratwurst, but was in fact Jamaican jerk chicken made into sausage form – sign me up! Unfortunately, everyone else seemed to have the same idea which made this by far the longest line I waited in all day. As if that weren’t enough as I approached the front, I found out they had run out of the spicy variation and were left with mild.  The mild still had a decent amount of spice to it and it was a good way to end the day.

All in all, I highly recommend checking it out at least once.  With so many places to choose you could probably go every weekend this summer and eat something different every time!  Even people that don’t love trying new foods (why are you reading this?) will be able to find something familiar and everyone can appreciate the beautiful views.  One final note, I would advise you not to go this weekend because I am planning on going back and would like to avoid making the lines any longer 🙂